Lending environment in 2017 will upsurge more rapidly as opposed to 2016. Borrowers who considered non-traditional lending routes in 2016 when they were stuck in the middle of a transaction prevailed. Property market landscape in 2015 was similar to 2016, and savvy investors who stepped- up their games based on experiences took advantage of economic, demographic and technological trends. This short series is a minuscule summarization of 2016 commercial real estate events, and some expected trends that will continue in 2017.

On the economic front, the Federal Reserve (The Fed) signaled rates increase during the year and finally on December 14th 2016, the Fed took action and raised rates by 50 to 75 basis points. A number of factors kept rates low for the first 3 quarters of 2016 such as: import prices, strength of the dollar, and inflation in relationship to soft energy cost. As of this writing, the 10 year –Treasury is at 2.55%, which indicate   there will be a bit more pressure on the global economies as a whole, including Eurozone and China. This phenomenon will continue to make U.S assets in primary markets more attractive. The graph below illustrates projected Federal Reserve rate increase through beginning of December of 2016.

What about capitalization rate (Cap Rate)? There’s always a relationship between cap rate spreads and treasuries.  As interest rates rise it will push cap rates higher than current markets, hence squeezing cap rate spread. The cap rate spread over the 10-year Treasury yield is normally positive. Due to this reason, risk premiums associate with real estate assets are usually considered necessary to compensate for leasing, tenant credit risk and liquidity. Even with the sudden change in treasuries cap rates will not dramatically be pushed higher (i.e. from 4.50% to 6.50%) instantly. Yes, yield will drift upward gradually in 2017 as a result of the recent rates increase.

Based on current U.S Labor Statistic trends, employment will most likely remain at its current trajectory. It fell below 5% at the beginning of 1Q2016. Baby Boomers will continue to retire at current rate of 10,000 per day, downsizing their homes and move to walkable urban communities or senior housings – hence the rise in health care real estate construction and financing the past couple of years. That trend will continue in 2017. Chart 1 below is an illustration of Employment Statistics from 1Q2009 – 1Q2016. 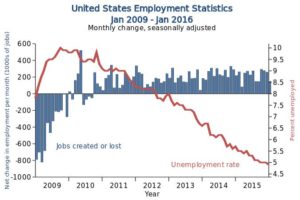 Whether we like it or not, technology will continue to transform the way the industry works, how we work, interact, and much more. For example, shopping centers have seen tremendous decrease in asset pricing, acquisition and disposition due to more companies going online and establishing a unique presence to cater to consumers’ need. Technology, however, will not replace human and intellectual capital. According to the Commercial Observer , “Meet VR2, a Robot Out To Change Real Estate and Cut Human Brokers Out , Sort Of”,  a recent article,  “From 2012 to 2015, 282 real estate tech startups, on average, were launched each year” – from real estate tech statistics. The expectation is that in 2017 this trend will continue.

According to recent Census Bureau population survey, it is fair to say global urbanization trend will continue in U.S and globally. The United Sates population from 2000 to 2010 increased by 12.1%. Both millennials and boomers are seeking access to jobs and amenities that suit their own needs. Let’s not forget that many suburban communities are now taking a more urban form with more mixed-use development and different form or transportation. This trend will continue in 2017.

Capital Deployment in U.S and International

Geopolitical uncertainty, economic impact, foreign policies, in many international countries will continue to open doors for international capital deployment into major U.S real estate markets, primarily: New York, Boston, San Francisco, Washington DC, Chicago, Lost Angeles, Dallas TX, Seattle, etc.  Other major international cities that U.S cities will compete with over the next 12 months for capital allocation are: London, Paris, Tokyo and Sydney. In fact, according to research conducted by Real Capital Analytics, “2015 saw $62 billion in transaction over a 12 month period ended in October.” That number was predicted to eclipse 2016 level by at least 20% and will certainly increase in 2017.

Retail Will Continue to Bleed

With recent rise in interest rates, there will be more stress on spending due to higher yield on credit cards. This swing in rates will force many consumers to venture online for spending as opposed to shopping in a physical store. The stress on the retail market in general will continue to suffer the effect “millennial demands” for different ways of spending. The past couple of years the trend in retail shopping has not been great. In an article that was published by David Carrig with USA Today,” major retailers closed hundreds of stores in 2016” and will continue to do so in 2017. For example, “Sports Authority is closing 460 stores, Walmart is closing 269 stores, Aeropostale is closing 154 stores and was in bankruptcy proceeding as well, 78 Sears and Kmart stores are closing”. Capital sources for retail lending will still be available, but the underwriting standards will be more stringent.  Furthermore, online shopping in 2017 will see tremendous increase in consumer spending more than in 2016.

Any decline in oil pricing will positively affect the nation’s trade balance. Remember! According to the Organization of Petroleum Exporting Countries (OPEC), the global oil cartel, the United States is still one of the biggest oil importers in the world – net about $190 billion per year. With decline in oil pricing, the expectation of dispensable income and surplus in 2017 will be favorable for most household and the national economy overall. All the petroleum products-based that are highly used in many real estate sectors will also benefit from lower costs, thereby increasing manufacturers’ decision about production.  Oil prices were all over the place in 2016, in the$20’s a barrel at the beginning of 1Q2016, and then doubled mid quarters. OPEC decision to cut global oil production and price will not only change the supply and demand outlook for oil in 2017 but will also benefit commercial real estate occupiers and owners. Graph 2 below depicts oil prediction from 2012 – 2016. 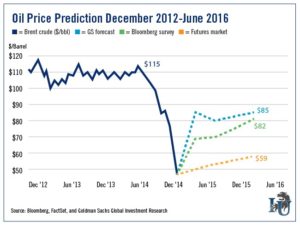 There will be continued supply in many sectors of the industry. Multifamily assets in many primary and secondary markets seemed to have reach peak level in 2016, and slowed again during 4Q2016. The growth of millennials population in major urban cities in 2017 will boast well for both demand and supply for multifamily properties. Other sectors that will boost more increase in supply and demand entering 1Q2017 are senior housings, student housings, and single-tenant industrial. One simply need to concentrate on the trend of: (i) 10,000 boomers retiring daily and moving to urban communities, (ii) more individuals enrolling in undergraduate, post-graduate, graduate, and other technical and vocational schools, and (iii) big retailer brands shutting down big box retail stores and building industrial manufacturing warehouses across several states for more inventories – caused by suppliers, technology, and online shopping. All of these macro-economic factors will continue to shape supply and demand in 2017.

Commercial real estate developers, occupiers and owners will continue to look for more alternative funding options.  As a result, 1Q2017 will start on a strong premise, “non-banking institutions will issue more debt than 2016 and will become the center of many real estate transactions.” The regulatory landscape continues to place a burden on many banks. Dodd-Frank Wall Street Reform and Consumer Protection Act of 2010, commonly known as “Dodd-Frank” has imposed additional regulatory encumbrance on Commercial Mortgage-Backed Securities (CMBS) lenders. Mr. President Donald Trump has appointed Steven Mnuchin as Secretary of Treasury, and that will tell the tale in 2017 about Dodd-Frank. In an interview with CNBC after Mr. Mnuchin was appointed he stated, “Revising Dodd-Frank will be the number one priority on the regulatory side.” Additionally, Credit and Risk Retention rules are slated to go into effect on December 24th 2016. These rules are going to impact how CMBS structure transactions onward based on many critical metrics and the uniqueness aspect of their tranches. The Great Recession of 2008 was protracted and created so much distortion in the market for local and regional banks; the sector was seen as disproportionately risky. Consequently, more regulations became a focal point of policy-makers over the past 10 years, which slowly helped regain consumers’confidence.

As the economy rebounded to a certain level in 2016 real estate fundamentals improved, capital deployment amplified, and many investors were less risk-averse. Numerous points discussed in this short article were only a quick summarization of certain key events that took place in 2016 and some of the trends that will continue entering the first quarter of 2017.  Given the fact that real estate is the oldest industry known to mankind – land has been here before men. Ultimately, it is fair to say no matter what occurs in 2017, the complex, fun, infallible, and exciting world of real estate will thrive.

Ibsen Alexandre offers his opinions about real estate finance and investment at www.Refivest.Com and other real estate publications. He can be reached at ibalexandre@refivest.com

The opinions expressed herein are those of the author(s) and do not reflect the view of a particular firm, its clients, any respective affiliates nor any Media Platform. This article is for educational general purposes only and is not intended to be and should not be taken as solicitation to lend.