On September 24th 2016 when the Federal Reserve leaders met to set interest rates, nearly 35% of markets participants expected an overnight rate hike that was paused to exceed 50 – 75 basis points – that never occurred. Everything now points to a rate increase at the end of 4Q2016. How does that will affect investors and borrowers? This short piece of content is not intended to give economic, financing advice, or reporting the news. The point of this fragment is only to convey “observable trends and unilateral comments” giving the reader a quick glimpse about future forecasts.

The job market is fairly strong and that’s a great indication for rental strengths in top tier markets, which in turn help alleviate the fear of asset pricing. What is going to matter most in the long run is the effect increase in rates by The Federal Reserve (the Fed).  The spread between treasury rates and capitalization rate at the beginning of 3Q2016, which is a good determinant for asset value, was about 436 basis points. That’s about 113 basis points higher than long-term historical average of 323 basis points. Typically this spread is lower; as a result the space for absorption for increase in rates, when that happens will not be a terrible impact on property values. Any extra spread will be valuable as that will absorb a small increase in the 10-year Treasury yields.

When observing economic trends in primary and secondary markets in major metropolitan statistical areas nationally, the numbers of millennials that continue to rent as oppose to acquire properties have in fact increased and this is mainly attributable to: 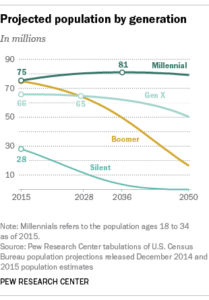 As far as foreign investment and liquidity is concerned, capital will still find its place in major markets in the U.S, especially New York City. Overseas investors will continue to deploy capital in order to seek higher yields and have better shelter for their funds. Even with a market swing of 25-50 basis points in the upcoming months, investors with greater risks and rewards appetite will remain relatively strong. One reason for this, from a geopolitical standpoint there is still more stability economically and politically in the United States – assuring investment sentiments will remain positive. Could there be a short decline in asset pricing? Absolutely! That will most likely due to overbuilding, but not lack of capital.

Even with a rise in interest rates, more strenuous regulatory constraints for construction lending, coastal markets with ports such as: New York, Boston, Washington DC, Houston, Seattle, San Francisco,  LA,  Portland, etc., will remain attractive  because of good supply and demand. Investors will continue to build and invest where competition is either less farce or where as an entrant will create opportunities in the long run. Consequently, opportunities for financing and refinancing will remain very robust – at least for the next three years.  Truthfully,  no one knows exactly when a bubble will burst or when the next cycle will take place. Companies with the technical expertise, market reach and exceptional experiences in various market cycles will always have the ability to help clients in uncertain times – there will be lots of opportunities for investors i 2017.

Where are we in the cycle then?  Based on historical economic cycle, clearly we are 10 years removed from the last peak, and if one examines past economy cycles dated back to the Great Depression in 1930s, and Savings and Loans in 1980s, there is clear evidence of many similarities such as:

These forces played a part of the Great Recession of 2008, and now that we are 10 years removed, is it time to panic about rise in interest rates and asset pricing? Firstly, the Fed decided to raise rates today, December 14, 2016. Business loans and consumer loans will be slightly more expensive entering the first quarter of 2017. The new rate increase is between 50 to 75 basis points.  Secondly, according to the Bureau of Labor Statistic wages are currently growing at 2.8% annual rate. This is based on last quarter employment reports, which is indicative of a tightening of the labor market.  Thirdly, unemployment rate for November was at 4.6%, the lowest since the start of recession of 2008, which play a role for the Fed to act about rising rates.

Lastly, bond investors are seeing more signs of coming inflation. The rate jump that happened right after the presidential election early November 2016 could have been in direct correlation with The Organization of the Petroleum Exporting Countries (OPEC) agreement about cutting production of oil, which would lead to higher prices, thereby boosting inflation rate. Furthermore, as of this writing the 10-year Treasury note is up to 2.54 %, a 30 basis point over the prior year. The expectations of current economic, social, and political events signal there will be slight increase in interest rates, for the first quarter of 2017 and yield on the 10 –year Treasury will certainly hit at least 2.70% by end of fourth quarter of 2017.

As for asset pricing, asset cycles and the macroeconomic links that exist, in order to understand the key dynamics, it is important to look carefully at behavioral decision- marking from policy-makers, academia, government l industry leaders, etc. The Great Recession of 2008 is a great example. Generally, the most destructive cycles were those in which asset price leverage and credits was significantly intertwined, causing the utmost systemic effect. Does commercial real estate assets will suddenly spiral into oblivion? Of course not, however, it is clear to understand that the risk of crashes associate with commercial real estate also exist, and the culprits are simply a few macroeconomic indicators such as: bond yields, inflation rate, consumer confidence, deficit spending, employment, and one of the sector’s growth – net operating income. Ultimately, changes in interest rates, capitalization rates, and property values will occur and market cycles will continue to play a role in investment and financing decision.

Ibsen Alexandre offers his opinions about real estate finance and investment at www.Refivest.Com and other real estate publications. He can be reached at ibalexandre@refivest.com

The opinions expressed herein are those of the author(s) and do not reflect the view of a particular firm, its clients, any respective affiliates nor any Media Platform. This article is for educational general purposes only and is not intended to be and should not be taken as solicitation to lend.